(The following information was taken from  Israel Ministry of Foreign Affairs)

Mountains and plains, fertile land, and desert are often minutes apart. The width of the country, from the Mediterranean Sea in the west to the Dead Sea in the east, can be crossed by car in about 90 minutes; and the trip from Metulla, in the far North, to Eilat at the country’s southern tip takes about nine hours.

Israel may be divided into four geographical regions: three parallel strips running north to south and a large, mostly arid, zone in the southern half.

The coastal plain runs parallel to the Mediterranean Sea and is composed of a sandy shoreline, bordered by stretches of fertile farmland extending up to 25 miles (40 km.) inland.

In the North, expanses of sandy beach are occasionally punctuated by jagged chalk and sandstone cliffs. The coastal plain is home to more than half of Israel’s 7 million people and includes major urban centers, deep-water harbors, most of the country’s industry, and a large part of its agriculture and tourist facilities. 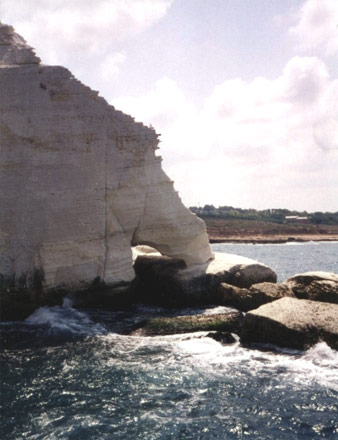 Several mountain ranges run the length of the country. In the northeast, the basalt landscapes of the Golan Heights, formed by volcanic eruptions in the distant past, rise as steep cliffs overlooking the Hula Valley.

The hills of Galilee, largely composed of soft limestone and dolomite, ascend to heights ranging from 1,600 to 4,000 feet (500 to 1,200 m.) above sea level. Small perennial streams and relatively ample rainfall keep the area green all year round. Many residents of Galilee and the Golan are engaged in agriculture, tourism-related enterprises, and light industry. 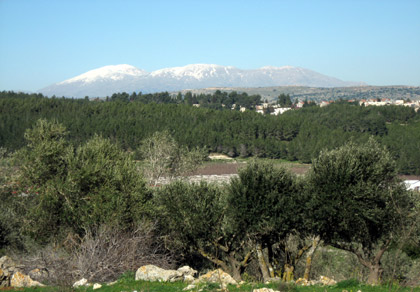 Mount Hermon (Photo: S. Lederhendler)
The Jezreel Valley, separating the hills of Galilee from those of Samaria, is Israel’s richest agricultural area, cultivated by many cooperative communities (kibbutzim and moshavim). The rolling hills of Samaria and Judea (the West Bank) present a mosaic of rocky hilltops and fertile valleys, dotted with groves of age-old, silver-green olive trees. The terraced hillsides, first developed by farmers in ancient times, blend into the natural landscape. The population is concentrated mainly in small urban centers and large villages.

The Negev, comprising about half of Israel’s land area, is sparsely inhabited, its population supported by an agricultural and industrial economy. Further south, the Negev becomes an arid zone characterized by low sandstone hills and plains, abounding with canyons and wadis in which winter rains often produce flash floods.

Continuing southward, the region gives way to an area of bare craggy peaks, craters, and rock-strewn plateaus, where the climate is drier and the mountains are higher. Three erosive craters, the largest of which is about 5 miles (8 km.) across and 21 miles (35 km.) long, cut deeply into the earth’s crust, displaying a broad range of colors and rock types. 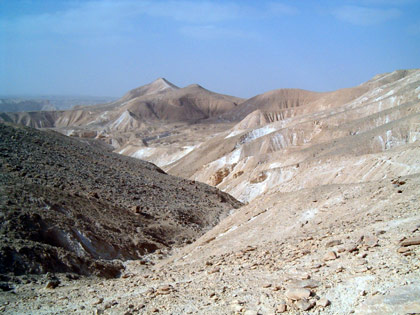 At the tip of the Negev, near Eilat on the Red Sea, sharp pinnacles of gray and red granite are broken by dry gorges and sheer cliffs, with colorful layers of sandstone glowing in the sunlight 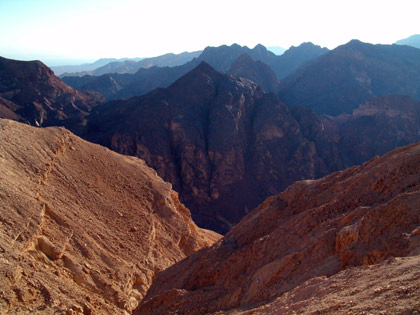 Lake Kinneret (Sea of Galilee), nestled between the hills of Galilee and the Golan Heights at 695 feet (212 m.) below sea level, is 8 km. (5 miles) wide and 21 km. (13 miles) long. It is Israel’s largest lake and serves as the country’s main water reservoir. Along Lake Kinneret’s shores are some important historical and religious sites, as well as agricultural communities, fisheries and tourist facilities. 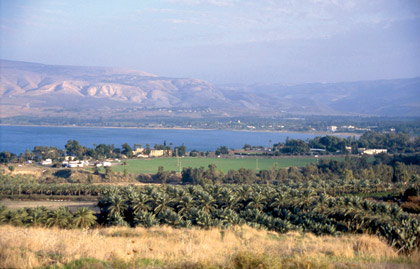 View from Kinneret village to the lake and Golan Heights
(Photo: Ministry of Tourism)

The Jordan Valley and the Arava, along the country in the east, are part of the Syrian-African Rift, which split the earth’s crust millions of years ago. Its northern stretches are extremely fertile, while the southern portion is semi-arid. Agriculture, fishing, light industry and tourism constitute the area’s main sources of income.

The Jordan River, flowing from north to south through the Rift, descends over 2,300 feet (700 m.) in the course of its 186 mile (300 km.) route. Fed by streams from Mount Hermon, it runs through the fertile Hula Valley into Lake Kinneret and continues winding through the Jordan Valley before emptying into the Dead Sea. While it swells during the winter rainy season, the river is usually quite narrow and shallow 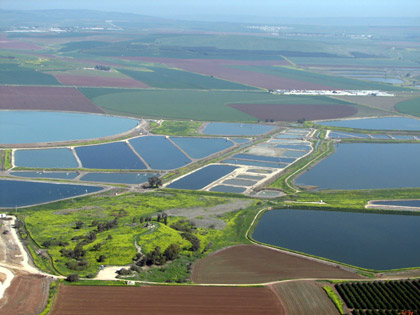 The Arava, Israel’s savannah region, begins south of the Dead Sea and extends to the Gulf of Eilat, Israel’s outlet to the Red Sea. Adaptation of sophisticated farming techniques to climatic conditions, where the average annual rainfall is less than one inch (25 mm.) and summer temperatures soar to 104ºF (40º C), has made it possible to grow out of-season fruit and vegetables, mainly for export. The sub-tropical Gulf of Eilat, noted for its deep blue waters, coral reefs and exotic marine life, lies at the southern tip of the Arava.

The Dead Sea, the lowest point on earth at about 1,300 feet (400 m.) below sea level, lies at the southern end of the Jordan Valley. Its waters, with the highest level of salinity and density in the world, are rich in potash, magnesium and bromine, as well as in table and industrial salts.

The Dead Sea’s natural pace of recession has been accelerated in recent years due to a very high rate of evaporation (5 feet – 1.6 m. annually) and large-scale diversion projects undertaken by Israel and Jordan for their water needs, causing a 75 percent reduction in the incoming flow of water. As a result, the surface level of the Dead Sea has dropped some 35 feet (10.6 m.) since 1960. A project to link the Dead Sea with the Mediterranean Sea by means of a canal and pipe system, which may help restore the Dead Sea to its natural dimensions and level, is under consideration.